The House belonged to my great grandmother, Annie Bowie. It is over 100 years old. It was passed down to my grandmother from her mother, then to her cousin. When Hurricane Rita came, the house started to fall down. It was just torn down January 15, 2008, but they are going to build another one. It is a shame that they have had to tear down over 100 years of life.

In 1910, Mary C. Patten — otherwise known to many as “Mamie” — had a wooden2-story hotel built on Lot 22 across from the Jasper County Courthouse, Jasper, Texas. As of today, it remains at its original location on the corner of Austin and Lamar streets. Mamie had never realized that her business would become so popular. Her business was a revolving door with traveling salesmen, lumber workers and area farmers who would love to come in for a nice home-cooked meal before returning home on lengthy business travels. Because of Mamie’s husband dying in 1898; at the age of 30, Mamie was left to raise her 4 children, Carl, Belle, Jim, and Robert. The hotel provided a good home for Mamie to raise her children and to have worked at the same time. The hotel was named after her two daughters Belle and Jim. After hard travel, many people would say there was nothing like the Belle-Jim cooking and good old resting time in the hotel rooms. Belle, Mamie’s oldest daughter was known as the “Girl with the Golden Saxophone”. She joined an all girl band called the New York Harmony Girls. This band toured the country and even performed in Mexico City. When people spoke about the band, they’d say it makes you want to get up and shuffle your feet. She was also the first child to give Mamie their first grandchild.

Now, Jim on the other hand from what I have researched continued to live at the Belle-Jim with her mother Mamie. The other siblings Carl, and Robert otherwise known as Bob moved to Houston “everybody laughed” thinking it was the red mud, old cows, and the hogs in the streets that drove them away. Carl eventually married in 1924 and Bob worked as a city sales manager for the Texas Company and Belle remained with the all-girl band. Belle’s fascination with the band prompted her to divorce her husband Dr. James A. Bledsoe and continue on the road with the band. Carl their son remained in Jasper his Grandmother Mamie and Aunt Jim. Carl missed his mother but had a happy childhood anyway because of Mamie and Jim. Carl’s father never mentioned missing his wife Belle but later in life, Carl ran across some letters to his mother from his father saying “mother please come home I miss you.” In 1992, Pat and David Stiles bought the hotel. This past year of 2007, the historic Belle-Jim Hotel stands tall; with a fresh coat of paint, it remains loaded with history and memories in the making. Lunchtime is still a busy time at the Belle-Jim and remains the gathering site for most Jasper-ites today for a great tasting meal with a little bit of social gathering. I wonder if today, Mamie Patten looks down on the town of Jasper and says to herself, “I never would’ve believed that my business would’ve turned out so well.” 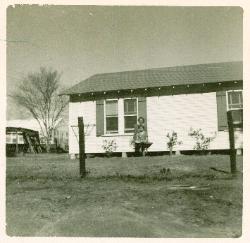 The house was built by Lela and R.C. Woods 60 years ago, in 1948. It costs approximately
$5,000 to build. It was a house for 34 years then it was transformed into an office building in 1982 for Ivy Nursery. In 2006 Ivy Nursery closed for business. Margie Mays, daughter of Lela and R.C. Woods, started renovating the building back to the home in which she lives today. 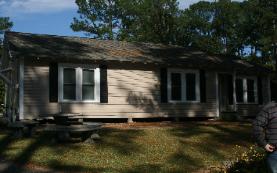 The Hardy Hancock Hospital opened November of 1923. Marvin Hancock, who was a lab technician and Dr. Hugh Hardy opened the hospital. Some of the doctors who practiced there over the years were Dr. Hardy, Dr. Ogden, Dr. Monroe, Dr. Hines, Dr. Stockdale, Dr. Kelly, Dr. Dickerson, and Dr. Sanders. The Hospital closed in 1964 when Dickerson Memorial Hospital opened. The old hospital building is now the office of Dr. Popejoy.

In the 1830s, one of the first congregations of the Methodist were formed in Jasper, Texas. Moses Spear was believed to have organized the first group of Methodist members. In 1839, the Revered Daniel Carl became the first Methodist preacher. Worship services were held in people’s homes, in the Masonic Lodge and the courthouse. According to the records, there were fifty people in total that attended the services. In 1857, trustees of the church bought one acre of land from Harriet Trotti. The first building was a chapel which members built on the land in 1859. It was made from lumber and was open to the harsh winters. The second building was completed in 1906. The Women’s Foreign Missionary Society raised money to build a new building. The new building lasted twenty years. The third building was built in 1926 and made of red brick. It was the first brick building in Jasper and had the first full pipe organ in this part of Texas. It was a landmark for forty-five years. The last service to take place was in 1969. The fourth and final building was completed in 1971. The original church bell was in each of the four buildings. It is now located in the church courtyard. In 1995, the Wesley Center was built. This center includes a basketball court, stage, and walking track. Following a horrible church fire destroying the First Baptist Church in 2003, the Methodists opened their building to help that congregation. The church still stands proudly today.

The Jasper Bake Shop
–Established in 1922—

For many years, The Jasper Bake Shop was the only bakery closest to Beaumont, furnishing bread and baked goods for the people of Southeast Texas. This bakeshop operated with two shifts, was open twenty-four hours a day, seven days a week, and the exhilarating aroma of freshly baked bread was a natural drawing card.

This bakery was especially busy during Christmastime. During the week of Christmas, many of the Jasper merchants would open up early and then stay open late. Many of the shoppers that would spend all of their days, and some of their nights, in town would make sure that the bakeshop was one of the stops on their list. It was a very gathering, social place. It was a warm and cozy and a place to relax. It had an oven that heated the room that was as big as an average-sized room. The food thrust in and hauled out of its waist-high clay hearth with the aid of a long-handled flat shovel called a peel.

You could also go during lunch or supper to get a real-meat hamburger, a chili-doused hot dog or a bottle of soda pop that sold for a nickel. There were lots of sweets in the bakery. During the holidays the bakers would fill the racks with pies and cakes as high as they could get them. The racks held things like two-crusted fruit pies of mincemeat and apple and peach and pineapple, all looking alike except for the number of slashes in the top of them indicating what flavor they all were. There were also open-faced pies of sweet potato and pecan, fluffy, piled-high meringues hiding chocolate, lemon and coconut cream fillings.

There were lots of cookies too. Such as big sugar cookies, ginger cookies, little chocolate swirls, sand tarts, buttercream stars, gingerbread boys and girls, cookie angels and Santa Clauses, holly leaves and Christmas trees, iced and glistening with colored sugars. People stood around in huge crowds just waiting for the fresh batches of really magnificent doughnuts, deep-fried and dripping from a bath of sugar syrup so hot it would positively burn your fingers. Some people got special cream-filled ones that cost some more but added lots of calories. There were even people that ordered the donut holes, (which were rare back then.)

These were the days of real home-comings. This basically means that the families back then weren’t as mobile as they are today. So they had more time to spend together on holidays and such. And to have a big pie or cake on Christmas or Thanksgiving was really great and the whole family loved it.

Even though most of the bakeries items sold at Depression prices, many people could still not afford them. None of the items sold for more than forty cents. But it was still a luxury that many families could not have.

The Jasper Bake Shop was not only a great bakery, but it was also a great place for families and friends. The store was opened for fifty-eight years before it closed in 1980. This building is no longer a bakeshop, but it still has historical value for when it was a bakeshop. This building is now owned by my grandmother, Jeanne Barber.

The Beaty-Orton lot was purchased in 1843 by Thomas Beaty and sold in 1851. Thomas Beaty’s grandson acquired the site again in 1888 and built this two-story house. This house is made of native pine. Beaty was a lawyer and a former Jasper County Sheriff. After Beaty’s death, his daughter Mauguerite and her husband, who was a local druggist, Jim Orton occupied the house. In 1971 Mrs. Orton sold the house to the city of Jasper. This house was recorded as a Texas Historic landmark in 1976. This house was restored in the 1980s. For a fee, residents can now book the Beaty-Orton house for receptions and parties.