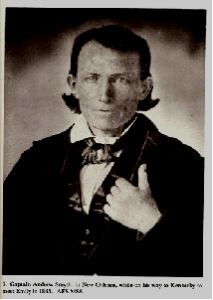 Andrew Farney Smyth, solider and riverman was born 1817 and raised near Moulton, Alabama. He lived most of his life in Jasper County, Texas. He was one of the early settlers. He was a planter, lumberman, and riverman. He left home in 1835 to join the Red Rovers, a volunteer company, formed to fight in the Texas Revolution. However, the Red Rovers had been massacred at Goliad. Smyth went south to join his older brother George Washington Smyth in Jasper County. He enlisted with the Jasper Volunteers, was made first lieutenant, and with the company marched out to join the revolutionary army. He arrived after the battle of San Jacinto. Smyth rode from San Jacinto to take the Mexican army back to the Rio Grande. With the war over, he returned to Jasper County, where he helped his brother George in the operation of a cotton plantation on Walnut Run. When George’s public career took him elsewhere, Andrew managed George’s farms and other interests in Jasper County. 1838 Andrew began his career as a riverman by building flatboats, which he would load with Jasper cotton and float on the Angelina and Neches rivers to the Gulf of Mexico at Sabine Pass. By mid-1840s he had seen the advantage of upriver business and built the keelboat “Jasper”. He would transport cotton, corn, and tobacco. 1844 Smyth went to Kentucky, where he married Emily Allen. They had 5 children. The Smyth’s lived in a log house on high bluffs where Indian Creek pours into the Angelina. In 1850 the Smyth’s moved to a new frame house toward the center of their property and away from the river. Smyth developed a variety of business endeavors through the 1850s. He built two water-powered mills on Indian Creek, one a gristmill and the other a sawmill. In 1856 he established a general merchandise store in Bevilport. February 1862, Smyth joined the Jasper Volunteers but left the company within a month and returned home. He served part of the time as county judge. After the Civil War, he purchased the first of his two steamboats, the “Camargo” and later the “Laura”. Both were used as freight and passenger service from Bevilport to the coast. On a stop in Beaumont, Texas, October 22, 1879, Smyth died suddenly of unknown causes. He is buried in Magnolia Cemetery in Beaumont, where a Texas state marker honors his service in the Texas Revolution.

August 24, 1784, in Meckenburg County, Virginia, A man which you get to know very well was born. His name was John Bevil. He was the son of John Randolph and Laodicea Burton Bevil. When He was young, he moved to Jasper County, Georgia where he soon married his wife, Francis Boynton who was originally from New York. They tried to farm in places like Ohio and Louisiana but it didn’t work. So searching for the chance to farm they moved to Texas. He soon found a spot on Sandy Creek which we now know as Jasper, Texas. Bevils’ settlement soon began to grow and had at least thirty families, which back then, was a lot. John Bevel was one of the early enterprises, which was a town site developer. While living in his settlement John Bevil still farmed and by 1860 had fifteen slaves. This was an outrageous number back in those days. No one knew if the town was Jasper or Bevilport. Back then land titles weren’t easily obtained. Settlers could have to wait years before it title was issued. That issue was soon resolved, in 1833 Bevil bought the south half of a tract of land on the Angelina River. He named this town Bevilport, which solved everyone’s wandering mind. John and Francis Boynton Bevil had eight sons. They included Jehu, Alfred Monroe, Frances, John Randolph, Riley, Stewart Boynton, Warren Hall, and Joseph Francisca. There were tons of Grandchildren and Great-grandchildren. In 1855 John’s wife died. When she died he went to stay with his son Warren Hall who lived in Tyler County. He remarried a young widow, Clarissa Miles. They lived in Beaumont, Texas in 1860. When John Bevil Died on November 10, 1862, he was again staying with Warren Hall.

J. F. Keith was born on December 18, 1857. He was the son of Henry Cortez De Soto Fayette and Sarah Elizabeth La Porte Keith. Keith’s parents were from out of the state. They moved to Pinetucky, Texas from Alabama as immigrants. The land was beautiful and any natural resource they needed was right at their fingertips. He began to cut wood, build their house and cleared enough space for a farm. The first job he had was to drive horses around all day. He inherited from his ancestors a love for the sea, but he gave tat u for his mother. When he turned fifteen years old he went to Beaumont to bunch shingles for a few hours and he had enough time to study his books. After 6 months he was promoted to engineer. He learned every single detail about logging and learned every machine related to logging. Until 1889, he remained with the mill. He became the superintendent of the building. In 1898, he left the company to peruse his dream. He wanted to own his own business. Keith bought the interest of Consolidated Lumber Export Company. He bought a large sawmill in addition to the purchase. In 1901, he sold the entire land to the Kirby Lumber Company. In 1902, he organized with the Keith Lumber Company, with the headquarters in Beaumont. 100,000,000 feet of timber was in his hands. He had a daily capacity of 80,000 feet cut every day. It became one of the largest Mills in South Eastern Texas. Keith married Miss Alice Carol, daughter of one of the principals in Lumber & Co. lumber enterprise. They were united on March 29, 1882. They had 5 children and lived in a happy home.

John Tom Beaty was born at Magnolia Springs, at the home of his grandparents, Mr. and Mrs. John Bluitt, in 1855. When he was still a young child his dad went to war. His father was a lieutenant colonel in the army and spent four years in the service while being stationed in Louisiana most of the time. Thankfully Colonel Beaty went through the war without injury. But Also freed 25 slaves. John Tom Beaty was a well-known man of Jasper, died in 1937 at the age of about 82. Leaving behind his beautiful house well known today as the “Beaty Orton House” which was remodeled into a present-day two-story home in 1903. The Beaty Orton house is now (present 2008) rented out for parties, wedding receptions, etc. Mr. Beaty also served as State Senator for this district for 6 years with the periods of time spent in Austin being the most time he spent out of town. He was “Attorney at law for the Kirby Lumber Company,” who owned the rail roads in the county until Santa Fe purchased the railroad. Also, Mr. Beaty was one of the first Jasper County Citizens to ride the Santa Fe train from Jasper to Beaumont. During the war John Tom was sent to Jasper as a lad, to be boarded in the home of Mrs. Merritt, and he was to attend the private school which was to in Mrs. Merritt’s home. Later, John Tom Beaty attended the “Old Steel Academy” in Jasper Texas and then completed his schoolwork at Trinity College in Limestone County. Law School for Mr. Beaty was received in the law office of a well-known attorney, T.W. Ford, he was district judge here in Jasper at the time. In 1886 Mr. Beaty passed his bar examinations in 1886 because he read and studied all available law books in Mr. Ford’s office possible. He continued in the law office of Mr. Ford after receiving his license to practice law until he decided to leave Jasper. Then Mr. Beaty associated with King Seale, noted attorney, and also with Gerald Bates. There are many negros with the last name of Beaty here in Jasper and that is because of the 25 slaves Mr. Colonel Beaty freed the slaves took the last name of their former owner.