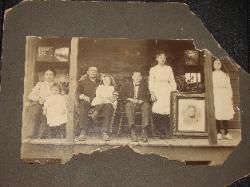 This is a letter and two cabinet cards from the Dickerson family of Ratcliff, Texas in the early 1900s. Cabinet cards were an early form of photography. They show the family of Berdine F. Dickerson, his wife Ida and children Jesse, Bessie, and Carrie. The letter was written on July 8, 1902 to Mary J. Dickerson of Morristown Tennessee. She is the mother of Berdine F. Dickerson. The letter tells of what is happening at this time. It is also to inform her of the death of his daughter Carrie who died from Typhoid Fever. The outer edge of the envelope is shaded with a pencil. This was the custom at that time to indicate death. The envelope also has a two-cent stamp. 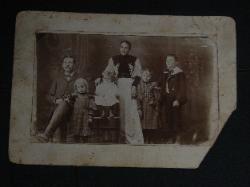 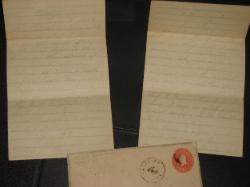 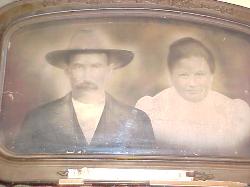 Jesse James Mashaw and his wife Sudie (Herrington) Mashaw are in the picture to the left. Jesse and Sudie were married on December 11, 1917. The picture was taken in the 1920s. Jesse was manly a dairy farmer but he also grew and razed all the food they ate. He started farming down by the Naches River and slowly moved up about 100,000 yards. Jesse and Sudie had six children (4 boys and 2 girls) they were Jessie, Ralph, J.W., Bernice, and my great grandmother Betty Sue Mashaw (Brown). My great grandmother’s house is right where they stopped farming at. Also until the last twenty years, the house that my great grandmother lived in was still standing there. 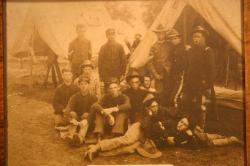 Photograph of E.I. Kellie and the “Jeff Davis Rifles” militia, taken in Washington D.C. in 1901.

Captain E.I. Kellie was a Jasper, Texas gentleman who fought for the Confederacy in the Civil War. Following the War, Captain Kellie returned to Jasper and engaged in several businesses including acting as one of the first land surveyors, piloting a steam boat on the Neches River, founding the “Jasper Newsboy” newspaper, and representing East Texas as a State Senator. He also founded a militia which became Company A 2nd Infantry of the Texas National Guard, and which he named the “Jeff Davis Rifles” with permission of Jefferson Davis, the former President of the Confederacy.

The Jeff Davis Rifles was essentially a club made up of Jasper men who had fought in the Civil War, designed to memorialize the confederacy and the war. Many of the men in the militia are the forefathers of families who still reside in and around Jasper, Texas.

This photograph was taken in 1901. It was owned by Captain E.I. Kellie until he gave it to his granddaughter, Eleanor Few. When Mrs. Few died, she left it to her daughter, Bonnie Few Walker, who is the current owner. 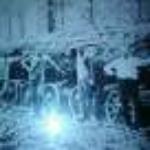 This is a picture of my great-grandpa Dean (He is located on the right side two people from the end). This picture belonged to my great-grandma Dean before she passed away. It now belongs to my Aunt Judy Marken. The reason this is my artifact because he holds the world record for the tree ever cut down by a band saw. The tree is 7ft. and 3in. round and 30 tall.

This artifact is a photo taken of the 1927-28 Jasper Bulldogs High School football team. The photo is 81 years of age and gives us a look back into the beginning of our very own Bulldog football team.

This photo is in front of the old First Methodist Church on Bowie Street. The Picture is of the Graduating class of 1927, in there is Willie McLeod.

This is a picture of the 1938 Jasper Bulldogs. Players on the team are Herman McQueen, Jr. Hearn, Ted Walters, Marvin Hancock, Claude Pane, Tom Jally, Travis Odom his nickname is (Cotton), W.T. Minyard, Elton Turner, Bootie Cannon Buck Pickle, and Red Oxley. It was a team of only 12. The captains of the team are Ted Walters and Jr. Hearn. Their sponsor was Mary McMaster and coaches are Walters and Ashley cheerleaders are Mary Virginia Stone, and Ella Lee Neal drum majors are Laweelle Warner and Emmie Deal who are all not included in this picture. 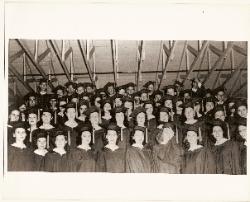 This is my grandmother Ruby Shaw’s graduating class of 1944. This photo was taken in the old high school gym (now the Jr. High). 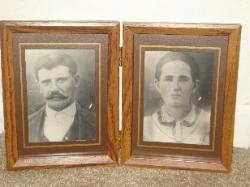 This is a picture of my great, great, great, grandparents, Sam Houston Davis, and Mary Jane Davis. Mary Jane was born on September 24, 1899, and lived to about sixty years old. The information on the back of the picture said she was washing clothes one day on the rub board, and they found her dead from a heart attack. Sam lived to be about 60 years old also. His death was also unexpected. A tree fell on him and killed him. 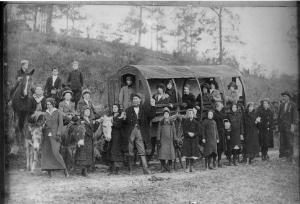 The forerunner of the school bus was called “the hoodlum wagon”. It was used to transport girls only to central high school. Boys had to talk or ride
the horse. The man in the middle with the beard is Nat Jeffers, the diver. The photo was taken circa 1913. Courtesy of the Jasper County Historical Commission. 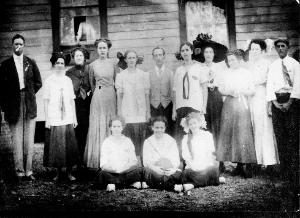 This picture of the Jasper High School Girl’s Basketball Team was taken circa 1909 in front
of the Armory building. Courtesy of the Jasper County Historical Commission. 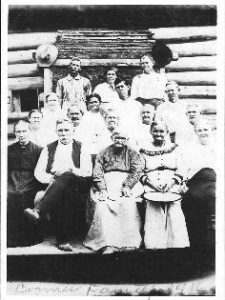 This is a picture of my great-great-grandmother, Sarah Ann Conner. She is the middle person in the first row and she is surrounded by her brothers and sister. This photo is now in possession of Mark Shaw.

The Seale Family Children – A Long Time Ago! 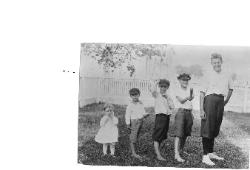 The Seale children were born and raised in Jasper, Texas about 93 years ago! They each had successful careers in East Texas. Pictured from left to right: Annie, Prenice “Pode”, Robert “Bobby”, James, and John. John was a banker, James was a doctor, Bobby was an oil well supplier, Pode was a land surveyor owner, and Annie was a housewife. I only knew Pode and Annie, but they both died when I was very little. This picture was passed from my Great-Grandfather, who passed it on to my Grandfather, who passed it on to my Father. It belongs to Steve Seale.

This picture is at Jasper’s sawmill. The pictures show the white men on one side and the black men on the other. The reason is that the blacks weren’t treated with the same respect as the whites. The picture is very old and has no detail of date on it.

These airplanes were damaged by the Germans in War World II. One of the pictures is a ship that got attacked by a “ME 109”. The other photo is the middle of an airplane that also got attacked by German “29 MILL”. This one killed the operator of the plane. Aldered E. Atwood Jr took these photos. These photos now belong to Renee Garcia, Daughter of Aldered. 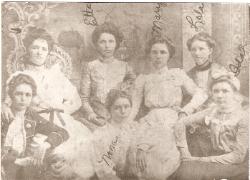 This picture was taken in 1900 in Siloam Springs, Arkansas. The picture is of my great-great-grandmother Margret Hewitt Alexander and her sisters. My great great grandmother was a twin and was one out of seven surviving siblings out of ten live births. Around this time it was normal or common to have this size family or larger. Once my great-great-grandmother was nine years old, her sisters and family moved to Siloam Springs, Arkansas, twenty years after the civil war, because of my great-great grandmother’s father was a confederate soldier. Once the civil war ended he came home to his family and married his wife and they together had a total of seven girls and three boys {the boys did not make it past infancy}, one of the surviving children was, of course, was my great-great-grandmother and her twin, Mary Hewitt. Their ages ranged from eleven to just nine months apart. The birth order was Effie the oldest of the seven, then the second oldest was Nona, then the third and fourth child was Mary and Margret Hewitt, then was the fifth child, Lola, the sixth child was Ida, then last but actually last was Phoebe, the youngest. My great-great grandmother married a man by the name of Walter Lee Alexander, who was a son of the U.S Marshall. Her husband and herself moved to Roanoke, Louisiana shortly after their marriage. She had five live births and had four to make it to adulthood. She had my great grandfather Howard Hewitt Alexander, who in turn, married Blanche Moreau of Kinder, Louisiana. She died at the age of 52, on December 21, 1928.